The “Theotokos of the Passion” Icon

The “Theotokos of the Passion” Icon

The relationship that the Lord Jesus Christ had with the Mother of God is a salvific relationship with distinction.

This relationship appears first at the annunciation when the Lord was incarnate in her womb. It later went through all the stages that Jesus lived and continues forever and ever. 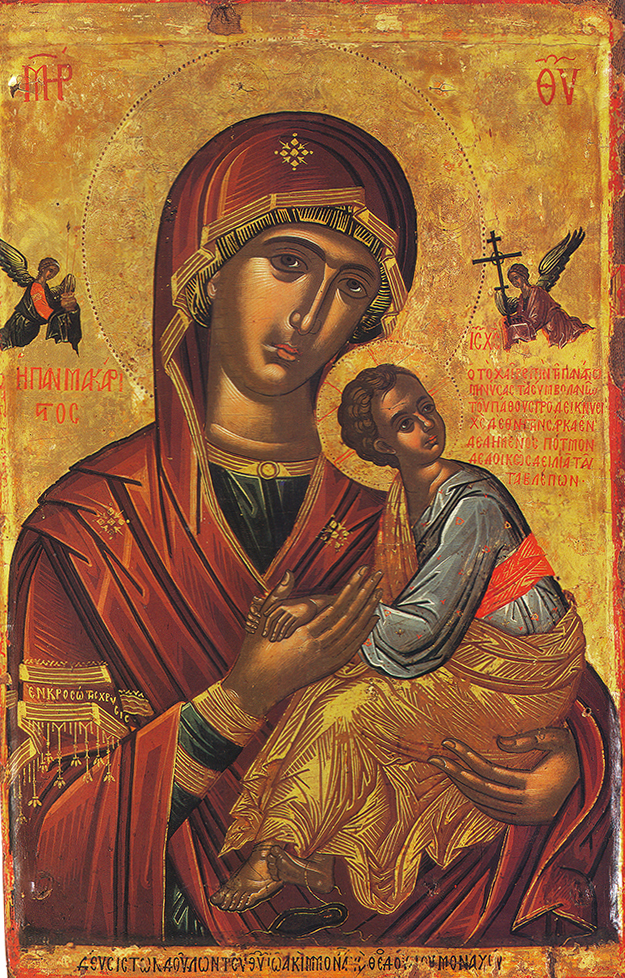 The Mother of God experienced suffering with her divine Son just like she experienced joy and glory, for there is no separation between these three. The Lord Jesus' path was full of these three elements from the very moment of His birth.

Hence, the Old Simon said to the Mother of God: “Behold, this Child is destined for the fall and rising of many in Israel, and for a sign which will be spoken against (yes, a sword will pierce through your own soul also), that the thoughts of many hearts may be revealed” (Luke 2:34-35).

The sword is, of course, the crucifixion and everything related to it.

This icon is called the “Theotokos of the Passion”, and dates from the second half of the sixteenth century AD. It is 79.5 cm long, 51 cm wide, and 6 cm thick.

It corresponds to a model of Byzantine icons known in Constantinople and spread to all the Orthodox countries (Europe, Cyprus, Greece and Mount Athos), where the Virgin and Christ contemplate the symbols of the sufferings carried by two angels. The title of the Virgin may differ: Αμολυντος (pure) or ‘the feared intercessor” and here ἡ Παμμακάριστος “Most Blessed”[1].

The natural pigments colors are mixed with egg yolk, and this method is known as Tempera, which spread after the seventh or eighth century AD, and replaced the mix of beeswax with the pigments -Encaustic.

This form is close to the shape of the “Hodegetria”, where we usually see the Virgin Mary carrying the Lord Jesus Christ on her arm, and pointing to him with the other hand.

Here, we see the Mother of God holding the Lord’s hands.

Some of them may think that she comforts Him, but in reality, he is encouraging her, saying: “Mother, do not be dismayed when you see me on the cross. I will indeed die in the flesh in my human nature, but I will rise from the dead because I am also God.”

Despite this economy of salvation, watching her son Jesus, hanging on the cross and stabbed with a sword that is permissible in her heart (Luke 2:35).

We see the Lord Jesus Christ in this icon looking upwards to his left. The icon writer wanted to make Him look at the Archangels Michael and Gabriel at the top of the icon, carrying the instruments of the crucifixion. The angel to the right of the Mother of God is Michael, (meaning “who is like God”).

Michael carries the spear by which the Lord was stabbed on the cross (John 19:34), and the reed on which the Roman soldiers placed a sponge of vinegar to present it to Jesus when he said I am thirsty: “Now a vessel full of sour wine was sitting there; and they filled a sponge with sour wine, put it on hyssop, and put it to His mouth (John 19:29).

The other angel is Gabriel. He carries the cross upon which the Lord was crucified. The name Gabriel means "the might of God."

The slipping shoe in the foot of the Lord, which is about to fall, has several interpretations that have been developed by iconography scholars:

1- It refers to the nakedness when he was crucified when they took off his clothes.

2- He voluntarily goes to death, takes everything away from him, rises on the cross to die, then resurrects and raises us with him, as we take off the old man to put on the new man.

3- It is mentioned in Deuteronomy, chapter 25, that if a man dies and has no children, his wife will marry his brother, and the first son is attributed to the husband so that his offspring will continue and his name will not be erased from the house of Israel.

The Jews were awaiting the coming of the Messiah and counted the interruption of one's offspring due to death or sterility a curse from God.

If the deceased husband's brother refuses to be paired with his brother's wife, the widowed wife takes off her shoe and spits in the face in front of the elders of his city and he is called "the taken off shoe sole".

The widow's association with her deceased husband's brother is usually very old and mentioned in Genesis (8:38).

The Lord Jesus Christ nullified these customs and abolished these worldly concepts because He is the True, Awaited Messiah.

Rather than keep waiting, they should follow him, and from here he said to the Jews:

Our names also appear in the book of life in the heavenly Jerusalem.

The Mother of God:

“Blessed are those who are invited to the feast of the wedding of the Lamb” (Rev 19:19).

The Clothes in the icon:

The clothes in the icon are dark-colored. The Virgin is wrapped in divine glory, as indicated by the dark red color, and on her right arm is a thread of gold. “Her clothing is woven with gold” (Psalms 45:13).

The Three Stars on the Mother of God:

In icons of the Mother of God, we see three stars, one on her head, one on the right shoulder and one on the left shoulder. These stars indicate that the mother of God is a virgin before the birth of the Lord Jesus Christ, and during and after His birth.

The Inscriptions on the Icon:

They are in Greek.

It is customary to write in this place the title of the icon that gives its identity.

The designation ἡ Παμμακάριστος “most blessed” may refer to the Great Monastery in Constantinople bearing this name, which became a patriarchal church between 1455 AD and 1587 AD, and in 1591 AD the church was transformed into a mosque in Istanbul under the name Fethiye Camii, the Mosque of the Conquest. Currently, it is a museum and was restored in the year 1949 AD by a Byzantine association in America.

- The text on the side of Christ says:

He, who previously said “Rejoice” to the Most Pure, now shows the symbols of the Passion. Christ, who wears mortal flesh, looking at the fatal destiny, is seized by fear.

The phrase " wears mortal flesh " refers to the perfect human nature in Christ.

The inscription at the bottom of the icon: Supplications from the two servants of God, the monks, Joachim and Theodoulos. The iconographers are Croats from a monastic stream that follows the iconographic tradition of Theophan the Cretan.