On the Sunday right after Pentecost, the Church celebrates the Sunday of All Saints. The feast of All Saints is meant to say that these were sanctified by the same Holy Spirit who came down on the Apostles as they gathered in the upper room in Jerusalem (Acts2). We also take it in baptism.

Therefore, we are called at every moment of our life to activate the Holy Spirit in our lives and be filled with it, living according to the Gospel in order to become holy. From the very beginning, we are called to be holy, as God is Holy (Leviticus 19:2).

The saint in the Orthodox Church is one who became a gospel, and has a right faith. The Patriarchal Synod announces it to each patriarchate and sets a feast day for him in the ecclesiastical calendar with a liturgical service and an icon written in his honor (With a Troparion and Kondakion).

2- The Icon of the Feast of All Saints:

The icons for this feast developed from the 9th-century onwards and does not vary much today.  We note from the Troparion of the Feast that it was at first for the martyrs, then saints and righteous were added. Thus, this feast expanded, stressing that the number of saints is not uncircumscribed.

3- The Lower Part of the Icon:

The center point of the icon is Paradise. This shows clearly in the lower part of the icon, 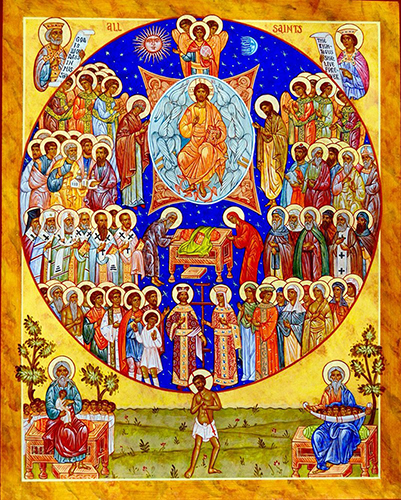 with an abundance of trees and hills, and representations of a flourishing nature.

In the bottom-left of the icon, we find Abraham holding on his chest a cloth which contains the souls of the pious. The tissue is a symbol of the sanctity of souls.

In other icons, Abraham carries a boy in white clothing, a symbol of his purity and the souls of the righteous saints. This is what we say in the service of a funeral. "And he shall rest in the arms of Abraham."

The presence of Abraham is related to the parable of Lazarus and the rich man in the Gospel of Luke (16: 19-31). After his repose Lazarus was transferred to the bosom of Abraham and was comforted.

In the corner to the right, Jacob is holding the “Twelve Tribes” in a cloth. In the center, we recognize Demas, the penitent thief holding his cross. As he repented, he said to the Lord “Lord, remember me when You come into Your kingdom.”  So Jesus told him that “this day you will be with me in paradise” (Luke 23:39-43).

4- The Central Part of the Icon:

In the central part of the icon is the great “cloud of witnesses” mentioned by St Paul in his letter to the Hebrews (11:33-12:2). The Saints are gathered around Christ, who is seated in the middle.

This expresses the passage of the Revelation of St John: “They sing the song of Moses, the servant of God, and the song of the Lamb, saying: “Great and marvelous are Your works,
Lord God Almighty! Just and true are Your ways, O King of the saints! (Revelation 15:2-4) Who are these people that sing? The answer is in the verse before: “Those who have the victory over the beast, over his image and over his mark and over the number of his name.”

Jesus is shown in his pre-eternal glory, with the Father and the Holy Spirit.

We note the presence of the Theotokos, on a horizontal axis, to the right of the Lord Jesus who is in the middle, with Saint John the Baptist to his left. They stand in intercession.

One of the most popular icons in the ancient tradition is known as “intercession” or “supplication” or Deisis from the Greek word δέησις. It brings together the Lord Jesus, the Mother of God, and Saint John the Baptist as we see them here. It is one of the special icons in which we see Mary without Jesus, as she is in a state of supplication. It was customary in old times that this icon be placed over the royal door under the crucifixion.

Four creatures surround the Lord Jesus Christ. They symbolize the four evangelists: Matthew: a humanlike angel (because he spoke a lot on the Son of Man); Mark: a lion, for the fact that his Gospel begins with "a voice of one crying in the wilderness" like the roaring of lions; Luke: the bull for mentioning Zacharias the priest, who made a sacrifice on the altar. This was a symbol of the cross. Luke the Evangelist was the only one to speak about the fattened calf in the parable of the young son. John: the eagle, who soared into theology, and spoke about Christ in great theological depth. Beneath the Lord is the Throne of Preparation, before which Adam and Eve prostrate themselves, carrying the cup pf victory. We can see the Cross behind them, and the Gospel set before them on the Holy Table. Adam and Eve have their heads surrounded by a halo, whereas in the icon of the Harrowing of Hell (Resurrection) they are the only ones not two have halos. There, the focus is on Jesus taking them from the grave.

Sometimes, the cross is supported by Saints Helen and Constantine, while Adam and Eve bow before the Gospel and the throne.

The Lord sitting on the throne, the presence of the cross, the gospel, and all the saints indicate a scenery of the last judgment.

The Saints themselves are gathered into ranks according to their “type”: martyrs, ascetics, holy fathers, Apostles, and so on. It should be noticed that the number of Saints is beyond counting.

This beautiful scene was beheld by the Apostle John in the book of Revelation:

“After these things I looked, and behold, a great multitude which no one could number, of all nations, tribes, peoples, and tongues, standing before the throne and before the Lamb, clothed with white robes, with palm branches in their hands, and crying out with a loud voice, saying, “Salvation belongs to our God who sits on the throne, and to the Lamb!” All the angels stood around the throne and the elders and the four living creatures, and fell on their faces before the throne and worshiped God” (Revelation 7:9-11).

It is what we read in the first reading at Vespers (Isaiah 43).

Often in the top corners of the icon we see King David (to the left) and King Solomon. David holds a scroll that read: “But to me, exceedingly honorable are Thy friends, O Lord” (Ps. 138:16). King Solomon the wise holds a text from his book of Wisdom that says: “But the souls of the righteous are in the hand of God, and no torment will ever touch them… In the time of their visitation they will shine forth, and will run like sparks through the stubble;” and “the righteous live forever, and their reward is with the Lord; the Most High takes care of them.” (Wisdom 5:16)

A mandorla of light that represents divine glory surrounds the multitude of Saints with the Lord Jesus in the middle. This shows the communion of Saints: communion with each other and with Jesus, the Victorious Lamb of God. The Saints hear our prayers through the grace of the Holy Spirit and intercede for us. We are all together a single family.

This is another scene of Revelation:

“Then another angel, having a golden censer, came and stood at the altar. He was given much incense, that he should offer it with the prayers of all the saints upon the golden altar which was before the throne. And the smoke of the incense, with the prayers of the saints, ascended before God from the angel’s hand.” (Revelation 8:3-4)

There are some icons of All Saints that show a hierarchy of the saints in heaven, above the Lord Jesus. So the sun, the moon, might also be present to indicate that Christ is the Creator of all, the Pantocrator.

The icon is a written gospel, written by the Holy Spirit. It is inseparable from the Christian liturgy and faith altogether.